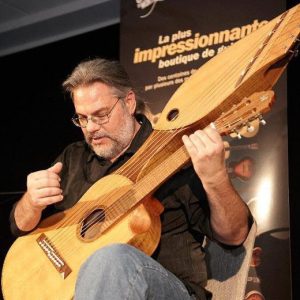 At dinner this week while celebrating my father’s 88th birthday I was asked by one of his friends what I called my music. This person has a few of my CD’s, and loves them, but wanted to know what to call it so she could describe it to her friends and family.  It took me five minutes and hundreds of words to describe it, and I knew right then what my week’s blog post was going to be about.  Thanks Gay!

A little over two years ago I got a very interesting email from my friend and fellow instrumental guitarist Kinloch Nelson with the subject line “What’s in a name?”  It’s one of the best treatises I’ve ever read on the conundrum of what instrumental guitarists like me go through in what to call our music.  Think about it.  If someone says they’re going to a folk, jazz, blues, classical, rock, or punk concert we all have a pretty good idea what type of music we’re going to encounter. Bookers at venues know when one of these acts calls to book a gig what they’re booking.  And we know what genres we like and those we don’t, so we can support ‘our’ music and leave the rest to others. We know what bin to go to in a record store (yes they still exist), or what to look under at iTunes, Spotify, Rhapsody, or Pandora to listen or download our favorite music. For those of you who know my music, what would YOU call it. One word, no more, no less. What is it?  And you can’t be nice and say “Good” or “Great”, what GENRE is it? Okay, I’ll be nice and you can have two words. But no more. END_OF_DOCUMENT_TOKEN_TO_BE_REPLACED

As has been the case for many of you the past couple of months, I’ve been going over 2013 income and expense for tax season.  Last year wasn’t a good year, not by a long shot. It was the worst revenue year I’ve had in over a decade. Simply put, I got my ass handed to me.  Last year I drove over 45,000 miles, booked, played and did the PR for 80 concerts, and played the guitar 2-3 hours every day. I spent 100 days on the road sometimes sleeping on couches, mattresses on the floor, and even a couple of nights in my car out in the middle of nowhere because they were charging $90 for a $40 hotel room.  After running the numbers I spent a minimum of 3000 hours working in 2013.  Let’s just say that after expenses my income was way under the PROPOSED minimum wage increase to $10/hr.   WAY LESS.

So it’s clear I’m not in this for the money.  And believe it or not, I’m one of the lucky ones. There are very few instrumental guitarists who get to do this for a living. Probably less than 100 or so on the planet.  And other than a couple of folks who we all know, none of us are getting rich doing it.  So why do it?  On a personal level I can’t NOT do it. I’ve tried.  I know for a fact that I won’t last long after my stage days are done, because that’s where I’m of service, that’s where I belong, and that’s where I can be an agent for change in a troubled world.

You see, in a world where people are leaving dogmatic religions and emptying churches I believe we need a place where people can come together and bond in a communal environment.  While listening to music on your own sound system can be a powerful experience, nothing has the impact of the shared musical experience with a room full of others.  I KNOW that people leave my concerts feeling better than they did when they came in, and I know that will carry over into the rest of their evenings and even the next day. Why? Because that’s what happens to ME every time I attend a concert.  And this affects the way we see and treat the world and the people  around us. END_OF_DOCUMENT_TOKEN_TO_BE_REPLACED

Recently I’ve been playing lots of gigs at libraries in New England. They’re very interested in my 60 minute program that uses music, guitars, and lecture to discuss how the guitar has gone from parlors and homes to the largest concert stages on the planet as the world’s most popular instrument.  At the CD table after each show I’ve been surprised to hear people notice that I’ve composed most, if not all, of the evening’s music.  I keep forgetting that these folks are there for the information and to support their library not necessarily because they’re a fan of my music-most of my shows are ticketed events and the folks coming know who I am.  The folks that come to see me at the libraries think of me as a guitarist/lecturer while I’ve always thought of myself as a composer who plays the guitar, and that got me thinking about why I compose music.

For as long as I can remember I’ve heard music in my head; I hear it pretty much non-stop from the time I wake until the time I go to sleep.  It’s one of the reasons I rarely listen to music anymore as it’s akin to having two radios playing two different radio stations at the same time.   This is especially true when I’m in ‘writing’ mode and have one or more pieces of music in active composition mode.  When I was a kid I never told ANYONE I heard music in my head-I was a dumb kid but I wasn’t stupid enough to tell anyone I was hearing things that weren’t there.  And I honestly thought the music was stuff I’d subconsciously picked up over the years; I had no idea the music was ‘mine’. (Still not sure about that). END_OF_DOCUMENT_TOKEN_TO_BE_REPLACED